I write whimsical children’s books about dachshunds. My stories promote acceptance, kindness, and closeness to nature. How did I get from a little girl in love with a dachshund to the owner of three dachshunds and an award-winning author of the Tall Tales series? Read on to find out how: my writer’s story is followed by my ﻿​​childhood dachshund story album﻿. 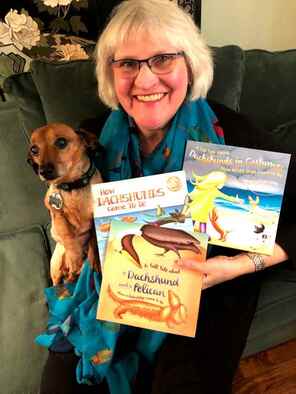 Kizzie, with the charming Buster and her three Tall Tales.
​Retired minister finds new life in writing children’s books
​
Children’s books brought unexpected joy into Kizzie Jones’ life. When she needed consistent self-care, they have given her a meaningful outlet and made a smooth transition from ministry to retirement.

She served 18 years as director of spiritual care at Horizon House Retirement Home, retiring in January 2015 after a medical diagnosis meant she needed to retire early. 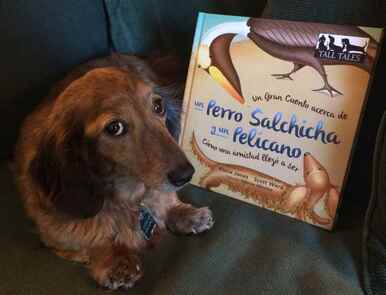 Josie with the Spanish translation of the second Tall Tale.
As author of three Tall Tales books, she found an outlet for whimsy and make-believe, creating stories that model and honor kindness, compassion, collaboration and diversity.

“I hope each time the books are read seeds are planted to further the cause for a gentleness of spirit for all humanity and nature,” said Kizzie, who lives in Edmonds. “Picture it: a world of friends delighting in the whimsy of life, bringing out the best in one another. I can think of no greater legacy.” 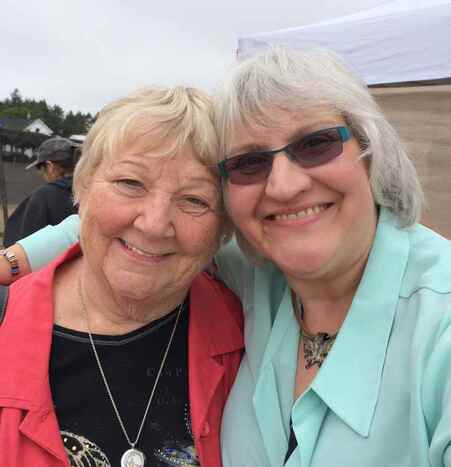 Kizzie with her best friend, Edythe Stromme, on their Oregon writers' retreat.
As reported in the June 2013 Conference News, while she and girlfriend Edythe Stromme, were spending a week vacation on the Oregon Coast, they stopped in an eatery with “Tall Tale” placemats. They agreed they each would write a tall tale.

“Within a couple of days Edythe, a fiction writer, had her tale polished and ready to be shared. The day before we were to leave, she asked how my tall tale was coming along,” Kizzie said. “I hadn’t written a word. I’d been a non-fiction writer for years, but had no clue how to make up a story.”

Years later, in September 2020, as I prepared to launch the 2nd edition of my first Tall Tale, How Dachshunds Came to Be: A Tall Tale About a Short Long Dog I was invited to Seattle jazz singer, LaVon Hardison's podcast, Detour to Where. The recording above is the audio story of how I took a detour from chaplaincy to authorship and started creating my Tall Tales series of children's picture books. 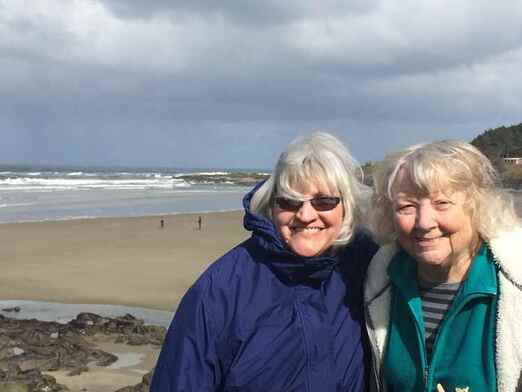 Kizzie and Edythe on the Oregon beach.
Having agreed to the task, Kizzie recalled the magic of the days there.

“For three days a pod of whales had been close by our lodge window. I could look out from my writing table and watch them spout and glide under the water with their massive backs,” Kizzie said. “During two of the lowest tides of the year, I had the time to observe normally hidden sea creatures. Interpretive signs at the ocean’s edge indicated sights on land, sea and air at different tides.

“The crowning glory was that each day I saw dachshunds with friendly owners who allowed me to get my doxie fix!” she said. 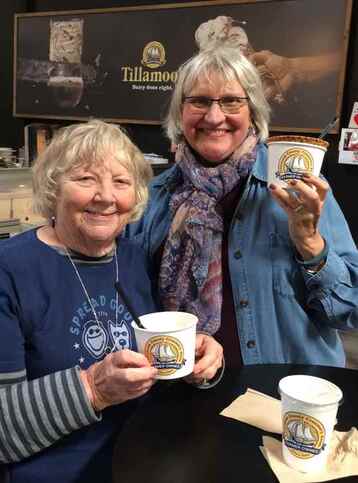 Kizzie and Edythe, with what writers need: coffee!

With her friend’s urging and collaboration with illustrator Scott Ward, How Dachshunds Came to Be: A Tall Tale About a Short Long Dog was born.
​

How Dachshunds Came to Be won first-place awards in the Tall Tales category of Readers’ Favorite, the National Indie Excellence Book Award for Cover and Graphic Design and New York’s Beach Book Festival. She also won first place for nonfiction writing from the Write on the Sound writers’ conference. 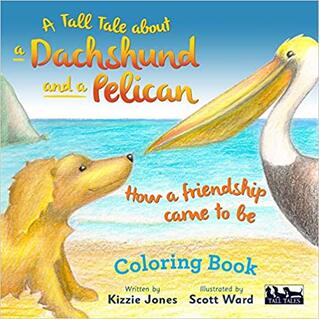 ​March 2016, the second book, a coloring book, A Tall Tale About a Dachshund and a Pelican: How a Friendship Came to Be﻿ was published.

That March, she read from her books and joined naturalists at tide pools during Cape Perpetua’s Winter Discovery Series.
​Meanwhile, Kizzie’s life has shifted to reading to children in schools, participating in Reading Across America events in honor of Dr. Seuss, reading for Global Points of Light, donating books for dachshund rescue fundraising and the Edmonds Off-leash Park, reading for Whale Watching Week at Cape Perpetua Visitors’ Center in Oregon, guest on Pet Talk Radio, speaker on marketing to writing groups, and active with a literacy program, Sala de Lectura in Cabo San Lucas, Mexico.
About Us